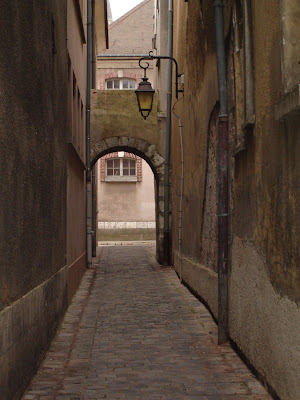 With Chartres checked off and another trip to the Bretagne already in the pipeline, who am I to complain? Well, I’m not sure, but I think Ill do it anyway…

first of all, I still haven’t nailed the topic for my Master’s thesis, tho I know it should be something on new economic geography and that I should choose at least two cities to analyse from an urban dynamic perspective. I was trying to surf the net for some good material, but the best thing I found was Rem Koolhaas’ treatsy on Junkspace, an amusing yet unsettling piece from the Harvard Guide to Shopping. There are some great quotes, like: “Although its individual parts [i.e. parts of a shopping center] are the outcome of brilliant inventions, lucidly planned by human intelligence, boosted by infinite computation, their sum spells the end of Enlightenment, its resurrection as farce, a low-grade purgatory… [junkspace]” ; “junkspace is like being condemned to a perpetual Jacuzzi with millions of your best friends…”. Anyway, read this rich form of scathing social critique if you have time; I certainly did, which wasted [at least relative to what I was supposed to be doing] even more of my time. I know I want to expand on the holistic approach I had in my last thesis, but Im not yet sure how I want to integrate such elements….

secondly, Ill have to spend this whole week on house-arrest studying for the theory of finance test I have next wednesday. This kinda snuck up on me… I was understanding every session until a few classes ago when I suddenly found myself copying endless processions of incomprehensible greek characters chained together with logical operators in what can only be described as a rococo math nightmare. Speaking of styles, check out this picture I shot of the stone work surrounding the altar at Chartres Cathedral.

thirdly, guess who I found hyping MEcon on the HSG website? 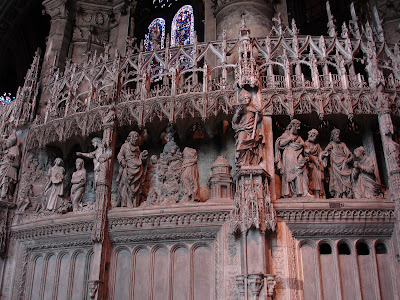 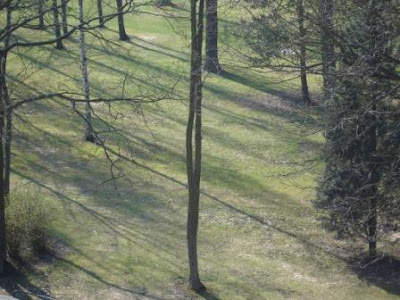 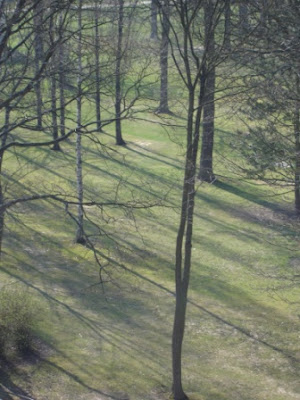 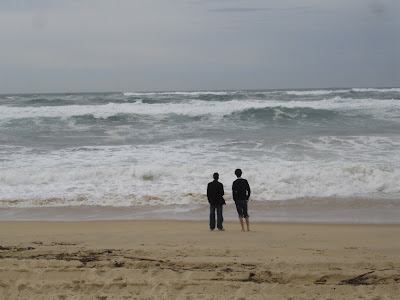 Ah yes. What bogus road trip would be complete without the obligatory escape-from the world, final destination, road-ends here beach picture? None of course; and so, neither was ours, until we went to the beach near Bordeaux. 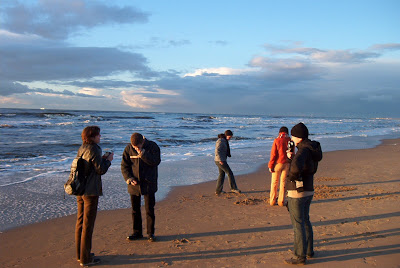 And to prove to you that Im not lying about this being symptomatic, here a random picture of Sandfoort on our Amsterdam road trip 3 years ago; 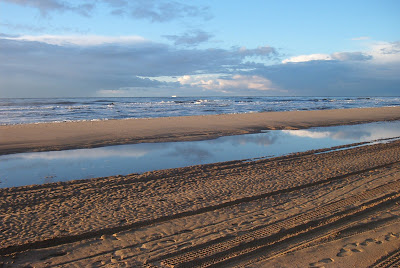 followed by one from our time in Oostende early last year (notice the apocalyptic name for added effect on this last one). So obviously, I’m not just riding clichés here. Facts prove time and time again: final destination beaches are part of every well-staged decadent road trip these days.

Ok, anyway, back to the main plot. Unlike the Bordeaux wine from the vineyard, we didnt really let the city unfold its bouquet all too much, arriving deep in the evening and leaving early in the morning the next day; instead, we got to see Nantes in quite vivid detail, including this spooky night shot of the back gate of Nantes castle… now how useful was that while you were trying to free that imprisoned princess? 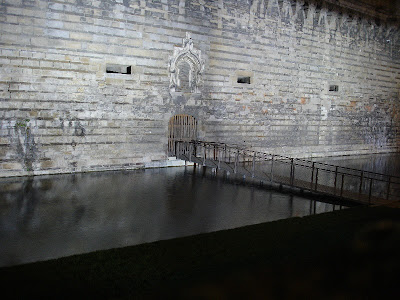 Actually, we ourselves chose all too often to leave the princes to the knights, preferring to leave our nights to the obligatory pizza-and-juice hostel sessions. Pictured: Richard, Luis, Mary-Louise, Juice, assorted bevarages, pizza. 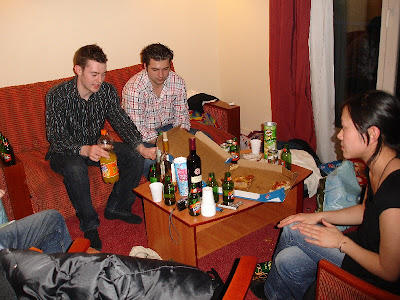 We then chose to move to more elegant surroundings, were dinner was served: 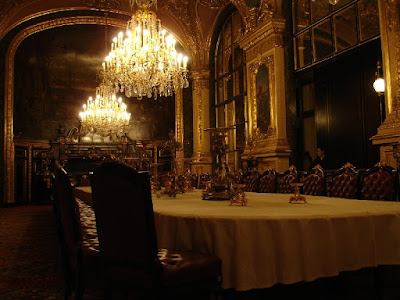 (no actually, this picture is from the Louvre I visited the week afterwards, but having accidentally made it into this post, it’s such a beauty, I dont have the heart to take it out again…)

I know, I am late with these pictures, having given myself one luxurious week between the trip’s end and posting. But hey, this way, all the memories are just that much more fuzzy, guaranteeing some more creative storytelling than the exact, meticulous style that you are accustomed to from this site. 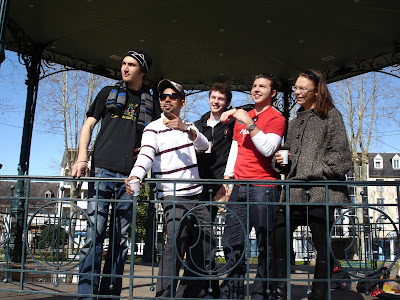 Yes, so once upon a time, there was a core team that set out to discover the Wild West of France, bottom up. Here on this picture, in a tiny little town somewhere along the way: Chaim, Sal, Richard, Luis, and Katrin. Notice the sun shining, a luxury which would become increasingly sparse as time wore on. 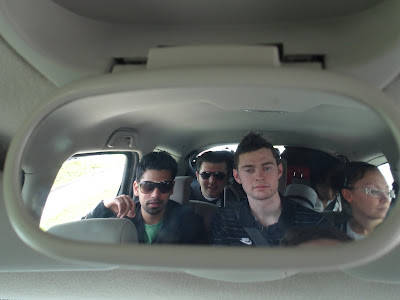 Im actually glad about the added realism in this picture; I could just have posted pictures where everybody is partying in the back of the car, instead of showing sour, concerned, or terrified faces. The tense demeanors could be due to three reasons: 1. I was driving as this picture was taken; or: 2. I was next up to drive when it was taken 3. I had just finished driving when the picture was taken, but was slated to drive again, some time in the future. 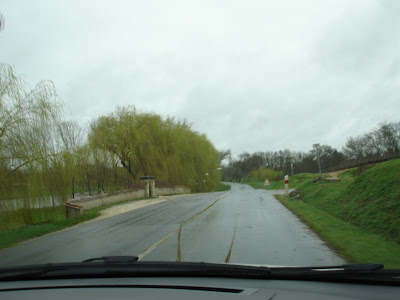 Ah yes, the typical “on the road” snapshot. Please notice the decorative feathers we added to the front during the trip, which miraculously stayed glued to the car the whole time and did much to bemuse French city dwellers. Here we are driving through one of the miriad of little generic towns on our way from Bordeaux to a vineyard of our choice. 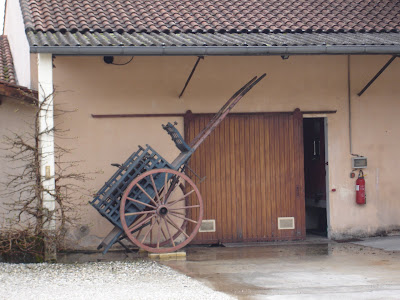 Here the vineyard of our choice from the outside. What was inside is anybody’s guess. hint: wine. 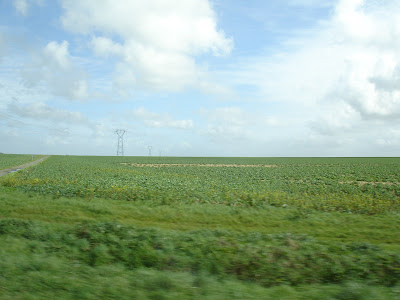 Ah yes, la campagne. How many of these cabbage fields did we see on the trip? Many. Many many. Too bad we only noticed on the before-last day that our map actually had the scenic routes marked. This had both positive and negative effects: positive was, that we finally actually took the scenic routes. Negative was the creation of a new inside joke: guys, this road is now scenic… wait wait… beginning at that curve over there, it is no longer scenic… 1..2…3… aaawww… its no longer scenic; guys, seriously, retire those cameras; this is no longer scenic. By the way: the picture above is not scenic; I have no scenic pictures, because at that time, I was busy trying to keep us all from doing a Thelma and Louise off the next cliff.