Continuing a dear dead flies tradition, the computer ate this post the first time I wrote it.
So I wrote it again, because I know that the computer likes seconds. Ah yes, the little squares of Rennes, teeming with life, booming and echoing with thousands of chatting denizens who should actually have been hard at work in plastic-and-steel cubicles, improving France’s disappointing first-quarter GDP figures. 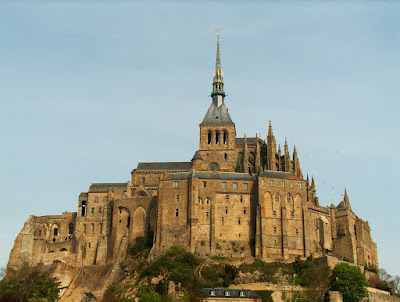 After Rennes came the first true highlight of the trip: Le Mont St. Michel; the approach was designed for maximum effect, with the majestically towering fortress throning over the landscape from miles away… the parking lot gets flooded every high tide, so we kept our cars under surveillance from the many small windows of the monastery. Interesting note: the very top of the Church was finished in the 20th century and added via helicopter. 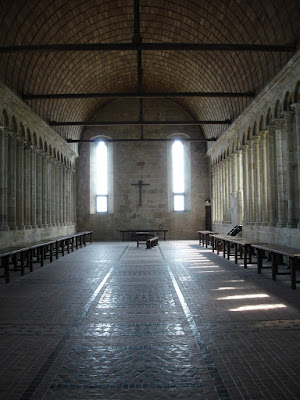 Inside, a surprisingly serene atmosphere… 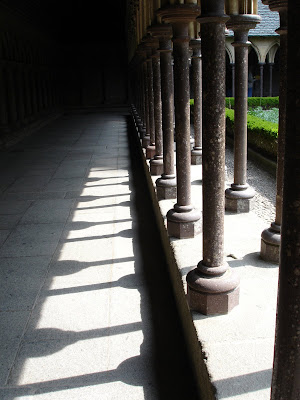 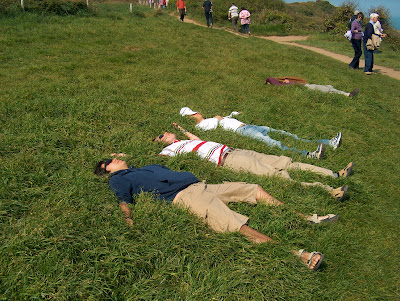 …the visit effeting our entourage to the point that they reenacted the dead WWI soldier stance on a field nearby, shortly after leaving for Dinard… 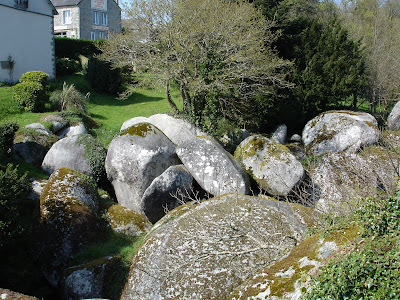 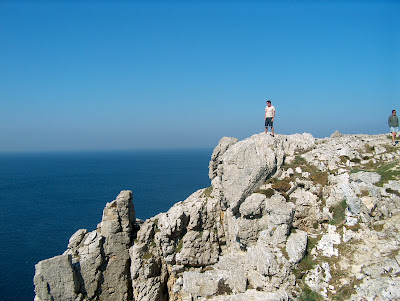 Then, finally, the cliffs of Crozon, our final destination… 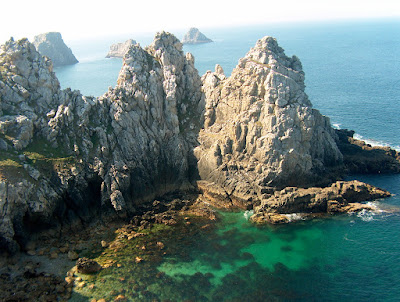 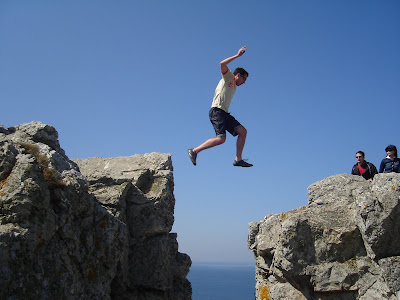 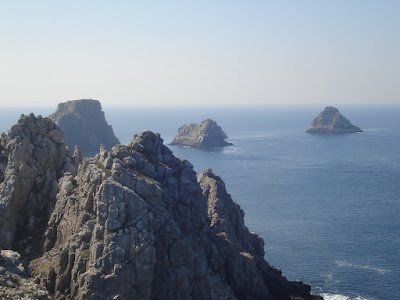 Who knew France had these treasures, other than the Guide Michelin? 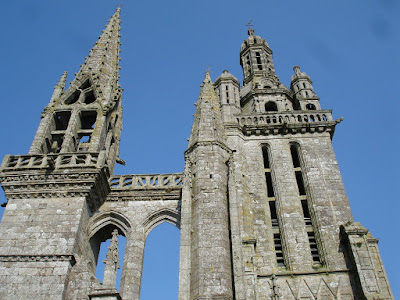 On the way back, we stopped in several picturesque towns, above the Roman/early Gothic Pleyben, home of the Pleyben cookies. 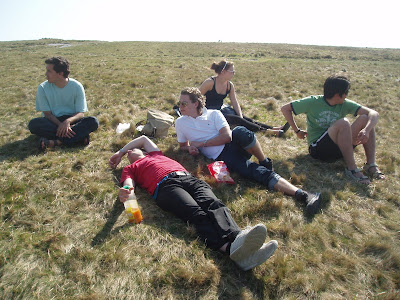 Menez Hom, supposedly the best panorama in the Bretagne, overvalued in our opinion (see picture) 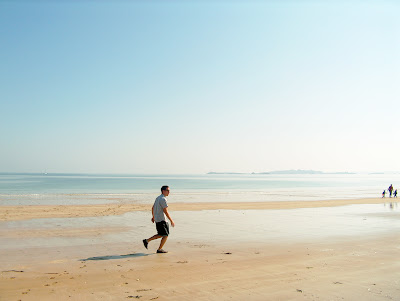 the obligatory beach picture, keeping in tradition. Above: Tamas running from seaweedman. (Seaweedman not pictured) 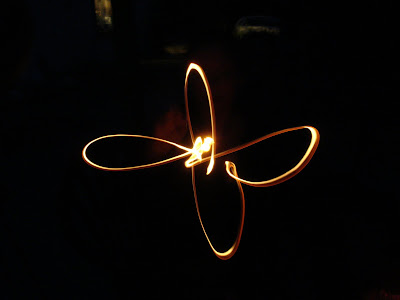 A flower, courtesy of Katrin, which sprang about at an evening BBQ session at a backpacker’s hostel somewhere in Bretagne. 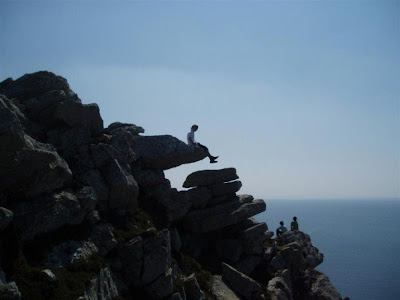 And then: just us, and the sea. 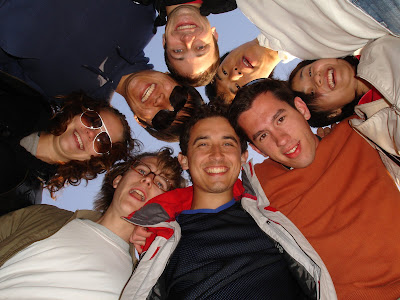 Decadence is a word that slips out of my mouth quite easily, in fact, I am the first to admit that I have been mis- and over–using the term throughout my blogger career. Some deadflies historians might actually point out my own special hypocritical relationship to the word.

But here at HEC campus, one doesn’t just take this word for a walk once in a while to chastise fellow students for lacking that socialist-compassionate glazing so appreciated in hardcore business universities… no, one can’t just spit out the word; one has to really reflect about it, before settling on using it as a sort of “I told you so” excuse for then guiltily indulging oneself to the core.

It is hard to quantify the exact magnitude of crazyness that the elections of the local BDE (student government) draws with it here; 300,000 carefully raised Euros need to be spent in 3 days on completely furtuitious activities, ranging from completely pointless, gargantuan-sized advertisements of the various warring apolitical parties: 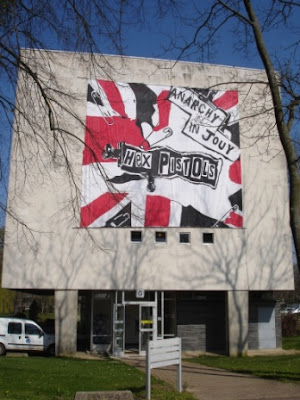 To the provision of random fun-tools around campus (Segway not pictured): 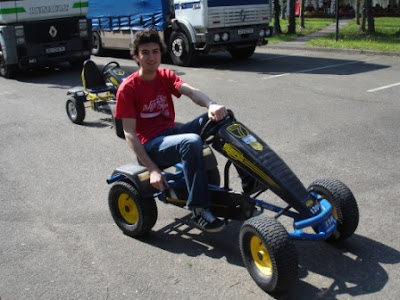 To the provision of only somewhat rickety amusement rides that, with only somewhat faulty security bracers and restraint mechanisms, are only somwehat dangerous to the soewhat jaded, indigenous student population: 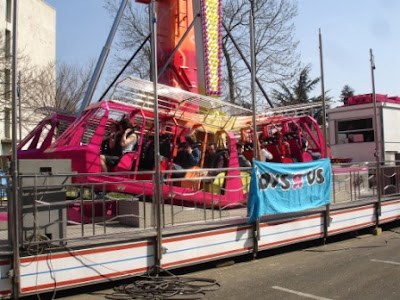 let me not mention the free food service for one week, with room delivery, the poker tournament with the plasma screen as prize (grabbed, of course, from the French by our Xchange man Paul aka Pokerman aka Shinny), or the parties with just about free everything.
Those of you who think young students here might be getting the wrong impression about the meaning of life, go figure. Yeah, go figure, while I take my thirteenth intoxicated bumper car ride…

Ok, I have to admit that I’ve been neglecting things. In fact, last time I logged into blogger, I could hardly even remember the password. I have been feeling guilty about not posting, tho, so guilty that I chose to drown the guilt in not posting even more. In fact, dead flies was not only dead in the last few months, but some of you might have gained the impression that it was actually even more than dead, perhaps undead, having reverted to some sort of electrodecaying afterlife as a zealously frozen-in-time mummy, or mummified zombie. Well, there is one thing that all mummies have in common, other than being wrapped-in-cloth carcasses, which is that they come back to life; this is also the reason why dead flies is back from the dead, albeit in a perhaps more deeply boring form.